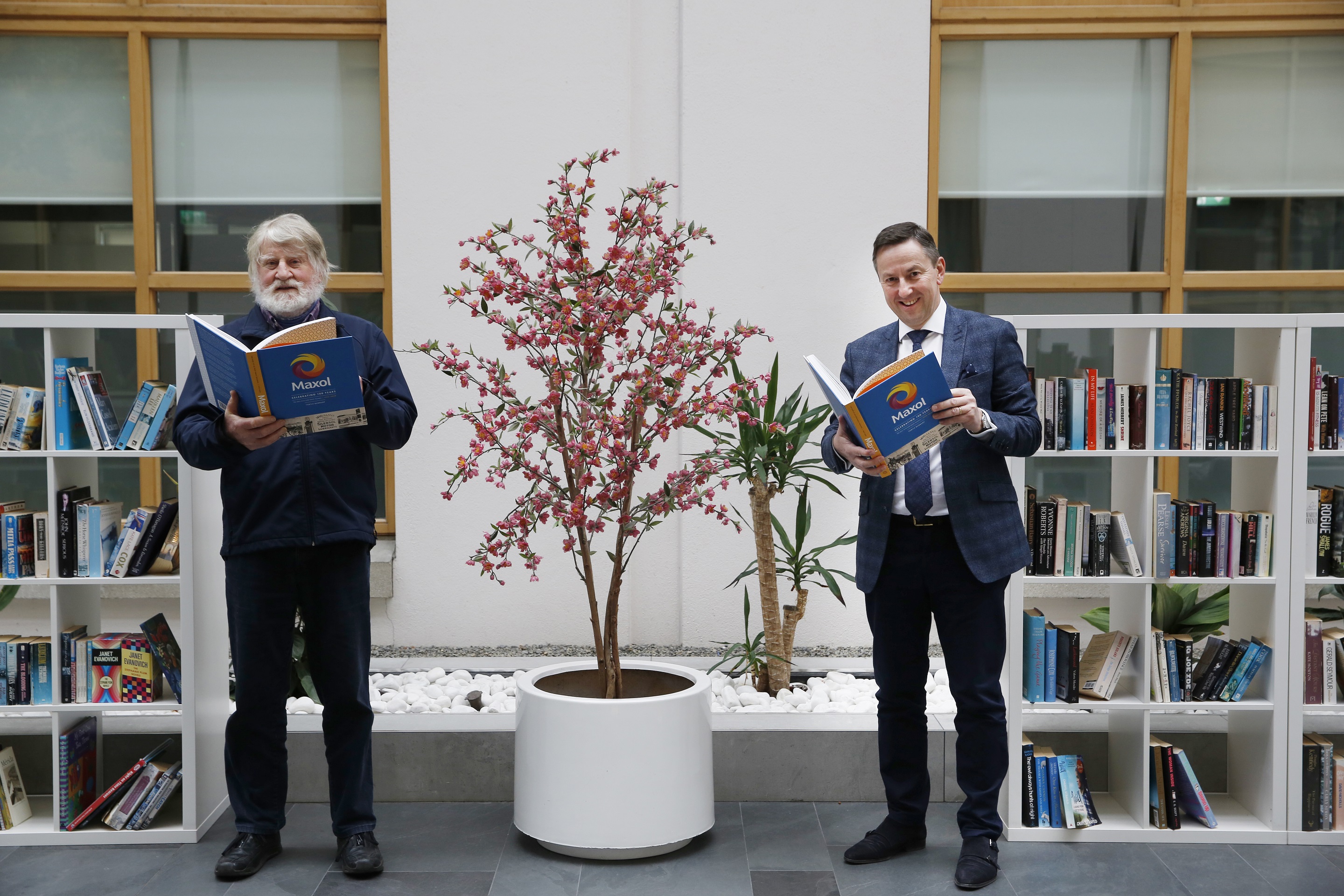 It all started 100 years ago when two brothers, William and James Gowan (JG) McMullan exercised their pioneering vision and today, Maxol has retained its title as one of the most forward-thinking and innovative companies of its kind in Ireland. Moreover, it remains a 100% family-owned Irish company of some 22 shareholders, 21 of whom are third and fourth generation McMullans and one who is married to a McMullan. How many other Irish family companies have managed to celebrate their centenary? The list is a short one.

As businessmen, William and JG achieved unparalleled success; William left school at 12 to work in a pharmacy selling domestic household oils. In his late teens, he moved to London to work for a chemist in Putney and lived with JG, who worked for the Post Office.

William had a knack of being in the right place at the right time, and this proved critical to his success. However, it was his tenacity and business savvy that drove him to turn luck and good fortune into opportunity. After the First World War petrol was rationed in Ireland but he discovered that, with a bit of adaptation, Benzol could be used as fuel for motor cars. He bought a supply and shipped it back to Belfast, much to the delight of people whose cars had been off the road for years because of the war.

In 1920 with the business prospering, William spotted the potential of oil rather than just paraffin. He travelled by boat to London and began doorstepping major oil companies. One of them was the Anglo-Mexican Petroleum Company where his persistence in organising a meeting with the head honcho paid off, and the McMullans secured the exclusive rights to sell Mex petrol in Ireland.

In 1936, William secured the exclusive rights to sell and distribute Calor Gas across the island of Ireland, securing his legacy as the person who introduced liquefied petroleum gas to Ireland. The business grew fast, particularly in areas where there was no electricity and people were still dependent on candles and open fires. Always enterprising, the company wasn’t only selling the gas, but the cookers too.  During the 1960s, the McMullans sold their interest in the gas business in what would become the first of several high-profile diversifications for the company the most recent of which was announced earlier this year. In July, the company entered the green energy market with the establishment of bright, which now supplies 100% green electricity to households across Ireland. Bright is a joint venture with Evermore Energy, a renewable energy company founded by energy entrepreneurs Ciaran and Stephen Devine. The partnership between the two family-owned companies supports, and drives, Maxol’s sustainability and diversification strategies. The formation of bright is only the second joint venture in Maxol’s 100-year history – the first being with Kosangas in 1954.

Maxol’s environmental journey has evolved over many years as the company continuously looks to reduce its environmental footprint and make the greener option the easier option for its customers. It was one of the first retailers to offer 100% compostable cups and lids, discounts are provided to customers who use a reusable cup when purchasing hot drinks, and the company has been installing compostable and recyclable bins across its service stations to support customers’ recycling efforts. Last month Maxol announced a new carbon offsetting programme in association with Greenprint, that aims to offset 100% of carbon emissions with its new premium fuel range – another exciting step towards greener motoring.

Sport has played a central role in Maxol’s rich history stretching back to the 1920s when it sponsored the Ards TT, the fastest race in Britain and Ireland and the Irish Grand Prix.  Amateur boxing, rally driving and the GAA have all benefited from Maxol’s patronage and for almost 30 years, the company has sponsored the Irish Universities Rugby Union’s series of multi-grade competitions. Maxol’s long association with rugby continues to this day and last year, Jacob Stockdale was announced as its first-ever brand ambassador.

Since 2012, the company has invested almost €200M in both new sites and the redevelopment of its existing network.

Despite the ongoing pandemic, this year saw a company investment of almost €20M across 16 sites including Dolphins Barn, Ballinteer, Dooradoyle, Ardbrae and Newbridge. Maxol’s first greenfield location since 2016 was opened at Rathnew in Wicklow following an investment of €3.75M, creating 20 new jobs. A further €14M investment is planned for 2021.

At the core of Maxol’s business model is its transition from being a fuel brand selling convenience products to a convenience food service brand selling fuel and new energies for mobility.   Last year its ratio of fuel to food was at about 60:40 and this year, that has shifted nearer to 50:50.

Maxol works with respected brands to deliver high quality food products and offerings and is a strong supporter of other Irish companies with 63% of its bakery and deli goods supplied by indigenous producers.

In 2019, Maxol launched its own brand range, amassing €2M in sales in year one alone, with the most popular items being milk, water and freshly made sandwiches. People’s perceptions and expectations of forecourt food have changed; standards are higher than ever before; forecourts are becoming destination stores and the concept of shopping local has regained pace since the pandemic.

Maxol’s exclusive coffee brand, ROSA, has also been an important part of the forecourt offering, with total sales reaching €8.5M for 2019, with similar projections for 2020.

The company is also diversifying in other ways, including in its fuel offering. By providing a mosaic of different types of fuel including more bio-friendly fuels and other lower emission fuels, Maxol is ensuring it caters to every driver’s needs.

With electrification also gathering momentum, Maxol is ensuring its forecourts have an infrastructure in place to support greener motoring. There are now charging points at eight Maxol service stations and the company continues to invest heavily in technology, which is playing a huge part in the evolution of the Maxol business. Pay-at-pump facilities are becoming increasingly important and prolific and the company is currently trialling mobile payment technology, removing the need for traditional card readers.  There are exciting and imminent plans to announce a new loyalty programme app, which will reward customers with special discounts, coffees and other incentives.

A sense of place

One of the main reasons for Maxol’s success is that most of its 237 sites are neighbourhood and community stores. It was and continues to be a safe place for local people in their local areas, the importance of which really came to light this year.

Maxol does not rely on passing motorway traffic and rather, remains at the heart of the community providing everyday essentials and services.  In doing so, it retains a large, loyal customer base regardless of market changes, or unforeseen crises, might have on the business.  Maxol service stations are run by local people, for local people employing local people and that has been its business model for the past 100 years.

In 2017, Maxol approached historian and author Turtle Bunbury to write a book to mark the company’s centenary and chart its 100-year history. Grandson of William ‘The Boss’ McMullan and current day director of Maxol, Noel McMullan worked closely with Turtle in compiling the tome that stretches back to the company’s formation and charts its journey to the present day. The book chronicles the 100-year history of the Maxol business offers a fascinating insight into the people that were instrumental to its growth, including all of the highs and lows that go hand-in-hand with running a family business through four generations.

The book explores the successes of a company challenged by world wars, global and national crises, oil crises and political unrest and reflects on the evolution of the company as it moved into the 21st century.  There’s also a smattering of nostalgia as the book remembers the much lauded Free a Nipper marketing campaign of 1982, which was fronted by the legendary Brendan Grace, saw 400,000 Nippers ‘freed’ and increased the fortunes of the company by 1100%.

The result, Maxol 1920–2020: Celebrating the First Hundred Years of an Irish Family Company, was a labour of love for Noel McMullan and is a beautifully presented, hardback coffee table-style book of some 260 pages.  Printing of the book was delayed to allow for the addition of a chapter on Maxol’s response to the COVID-19 crisis but is now, finally, available to purchase from www.easons.com.