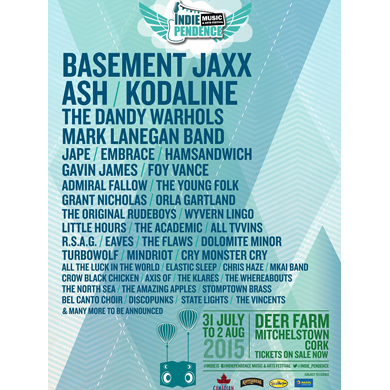 Ten years and counting . . . the Maxol sponsored Indiependence celebrates its 10th anniversary this summer with its biggest festival to date. Following the announcement of 10 acts in March, INDIE15 is now set to welcome festival floor-stompers BASEMENT JAXX and arguably the biggest Irish band of the last 12 months, KODALINE, to a rapidly growing line-up. They join fellow headliners ASH, along with THE DANDY WARHOLS, MARK LANEGAN BAND and some of Ireland's best live acts including JAPE, HAMSANDWICH, GAVIN JAMES and RSAG.

INDIE15 quickly sold out its early bird tickets but there are plenty of options left for August Bank Holiday weekend at Deer Farm - you can glamp in style at INDIE15's boutique PODPAD CAMPING (currently at a 10% discount until the end of April). Set in the foothills of the Galtee Mountains, this idyllic location has played host to some of the biggest names in music over the last ten years, including Public Enemy, Del La Soul, 2manydjs and the current all-conquering Hozier.

This year's Spoken Word Stage is presented by WASPS VS HUMANS, headlined by Manchester author and poet, MIKE GARRY and Dundalk Troubadour, JINX LENNON along with thought-provoking debates with Irish Times music journalist, Tony Clayton Lea as part of CULTURE VULTURES. The stage will also feature the CO PRESENT digital radio station, hosted by Dwyane Woods and HamsandwicH's Niamh Farrell, with a lively stream of guest interviews. INDIE15 will also have a soon-to-be announced comedy bill curated by ANDREW STANLEY, the ever-popular SILENT DISCO, great food and late-night DJs in the BIER HALLE.

In keeping with previous years, INDIE15 will host some of the best and latest acts in Cork music, including ELASTIC SLEEP, THE VINCENT(S), MKAI and MINDRIOT, with more to be announced.

Full details are available from the festival website www.indiependencefestival.com.  Weekend camping tickets for INDIE15 are now on sale for €109.

Maxol will be giving our customers the chance to win highly coveted festival tickets for INDIE 15 from week beginning 15th June.

Fuel Up for the festival, with Maxol at the heart of it!