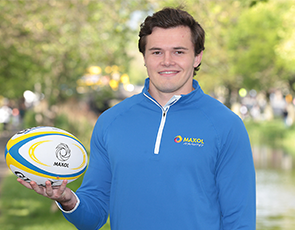 Maxol has announced its first-ever ambassador programme and today, professional rugby player, Jacob Stockdale, was revealed as its brand champion for the next three years.

To mark the announcement, Jacob took part in a media briefing in Dublin where he was put through his paces by MC Matt Cooper during a Q&A that revealed his love, not only for rugby but for golf and dogs. He also divulged that he’s quite partial to a protein-filled, fresh deli sandwich and freshly-brewed coffee when he’s on the go.

Maxol has been supporting rugby at grassroots level for the last 27 years through its involvement with the Irish Universities Rugby Union (IURU) and local club sponsorships, as well as the Ulster Mini-Rugby festivals for children in primary schools involving more than 1,500 participants.

The collaboration with Jacob Stockdale is set to enhance The Maxol Group’s association with rugby as the company continues to evolve its rugby sponsorship portfolio, with more announcements planned for later in the year.

Brian Donaldson, CEO of The Maxol Group said; “Jacob Stockdale is a fantastic ambassador for rugby, and he represents everything that is great about the game. And now, following today’s announcement, we know that he is going to be a great ambassador for the Maxol brand; he’s a strong role model and a credit to his profession and we are thrilled to have him on team Maxol.

“As a fourth-generation family business celebrating 100 years in 2020, we are committed to investing in and supporting the next generation, and that includes rugby greats, such as Jacob. Although he has already made a huge impact on the game, he also represents the future of rugby and this partnership is all about championing future generations.

“Maxol’s involvement with rugby spans nearly three decades and includes sponsorship of the IURU, which runs national tournaments for third level students. We also work closely with Ulster Rugby and feel that this collaboration with Jacob is a great way of tying all these strands together. The interest in rugby in Ireland is huge, I’m a massive fan myself and I know that everyone at Maxol is really looking forward to working with Jacob.”

23-year old Jacob’s professional playing career has been going from strength to strength and he is already renowned for his match-defining scores including against England in the Six Nations (March 2018) and the historic second-half try that helped secure Ireland’s first-ever win against the legendary All-Blacks on Irish soil.

When aged just 21, the 6ft 3” winger from Lisburn was voted the 2018 Six Nations Player of the Championship and the tournament’s top try scorer, with seven tries to his name.

Jacob spoke about his new role as Brand Ambassador for Maxol; “Maxol is an iconic, home-grown brand. It’s a family-owned, community-based business that has been involved with grassroots rugby for many years. And it does great coffee, which is a big plus.

“All of these things are important to me and I feel strongly that a brand has to be the right fit for the partnership to be authentic. I like the fact that Maxol has a strong history and brand legacy and that it’s a fourth-generation business that is looking ahead to the next generation. That ethos really appeals to me and that is why I’m proud to team up with the Maxol team.”

The partnership between Maxol and Stockdale will include a national advertising campaign, promotional and digital activities as well as participation in local events and initiatives across the island of Ireland.

The unveiling follows the company’s recent announcement of a significant investment of €100 million into the redevelopment of much of its network including a brand refresh and new menus including healthy options, as well as the introduction of its new exclusive coffee blend, ROSA in the Republic of Ireland. Maxol has a network of 231 service stations across the island of Ireland and is the largest private, family-owned business in the forecourt sector in Ireland.