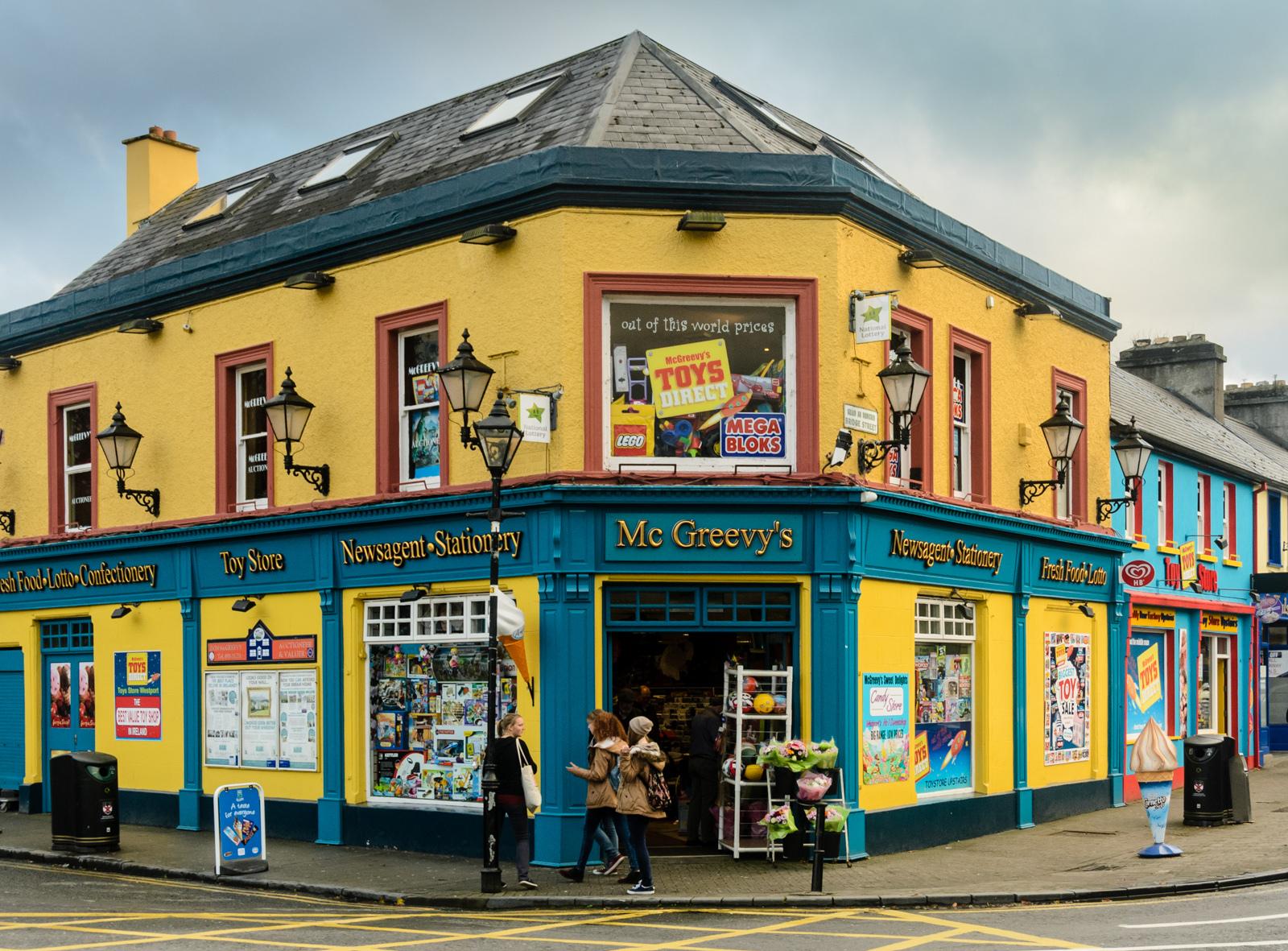 Connemara is considered to be one of the last areas of natural, untouched beauty in Western Europe. Situated right on the edge of Western Ireland on the shores of the Atlantic ocean, it is sparsely populated and home to more ponies than people. The ponies, by the way, a stocky breed called Connemara ponies, roam wildly across the moors and prairie land here, so you may have to stop the car to let one cross the road!

Wilder and less civilised than the Ring of Kerry, the Connemara region is suited to people who love the Great Outdoors - fishing, hunting, angling, surfing, and riding are all cherished ways of life here. Connemara is also part of The Gaeltacht, the traditional, Irish-speaking region of Ireland, so why not try to pick up the cupla focal (few words) while you’re here?

The whole route is 47.7km long and would take 52 minutes to drive it from Point A to B. But that would be boring, so we’re going to take the whole day here to explore….

Westport is a fantastic little place that’s very proud of its status as an Irish Heritage Town. Named by The Irish Times as the best place to live in Ireland, it is also a 3-time winner of the Tidy Towns Competition! Picturesque, charming, and friendly, you might want to spend a night or two here to soak up the atmosphere.  It was also home to the world’s first Pirate Queen, Grace O’Malley, and if you have little ones, a trip to the pirate-themed amusement park at Westport House and Gardens is a must - it was built on the ruins of one of O'Malley's many castles.

If you want to overnight, then Mill Times Hotel Westport a 3-star family-run boutique hotel in the heart of historic Westport, is ideal as a base from which to explore the Blue Flag beaches in the area and Croagh Patrick.

Before your journey, fuel up the car at theMaxol Service Station Ashlawn on Newport Road.

Make sure you have some sturdy boots on, because we’re going a-climbing! Murrisk is the starting point for the ascent of Croagh Patrick, a 764-metres tall mountain considered to be one of the most important pilgrimage sites in Ireland. Nicknamed The Reek, it takes an average person 2 hours to climb and another 1.5 hours to come down, so if you plan on doing it, we suggest an early start from Westport! 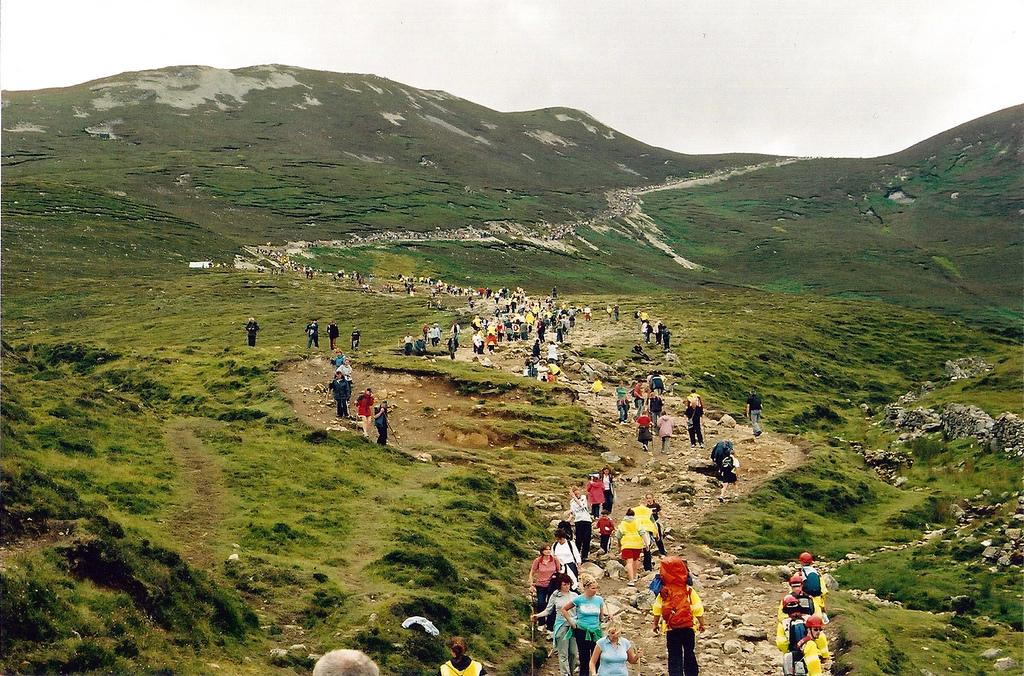 © Copyright Alan James and licensed for reuse under this Creative Commons Licence.

Or if you don’t feel like attempting the climb, have a browse around the Croagh Patrick Visitor Centre, called in Irish “Teach na Miasa”, located in Murrisk at the base of the mountain – they have a tea shop, souvenir shop, and an information centre to keep you occupied. Not to mention enough barmbrack (a fruited tea bread) to keep you going for days! 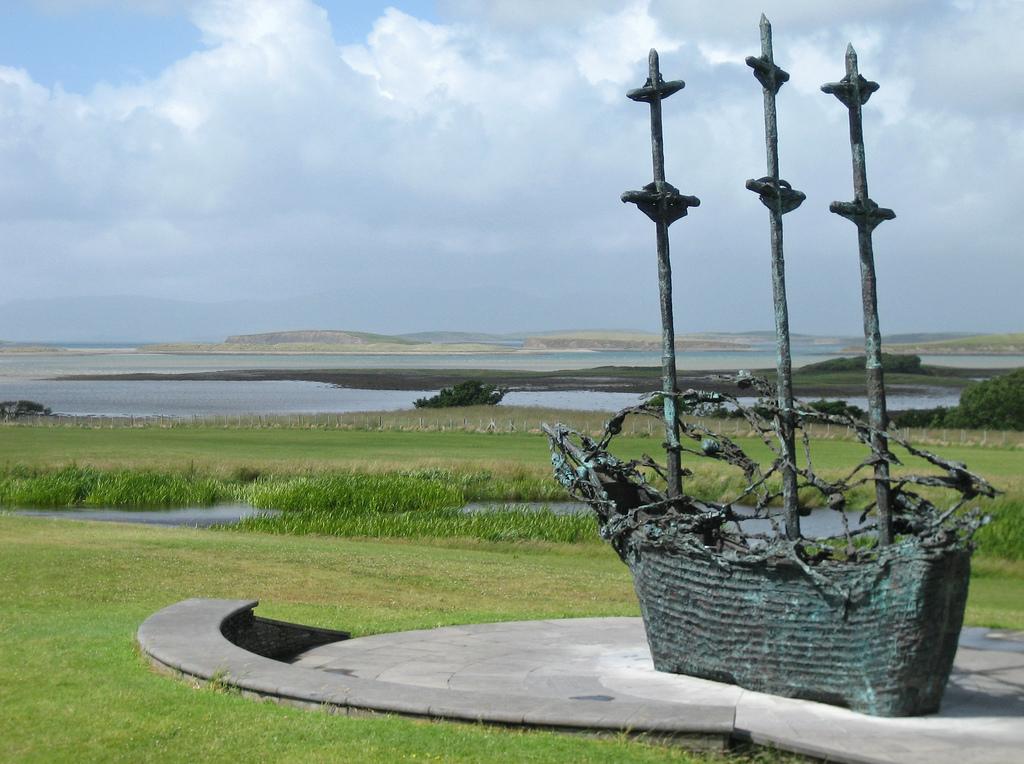 Opposite the centre you will find John Behan’s moving Famine Memorial Monument that stands in testimony to the millions of lives lost in the Great Famine – it depicts a so-called “Coffin” ship with the skeletons of the unfortunate clinging to the masts.

This route will give you superb views onto Clew Bay, where you can admire the small islands dotting the coastal waters - these are actually drumlins, leftovers from when the tectonic plates shifted during the Ice Age! Explain to the kids that these islands are from the same time as Sid the Sloth from Ice Age and they will be very impressed. 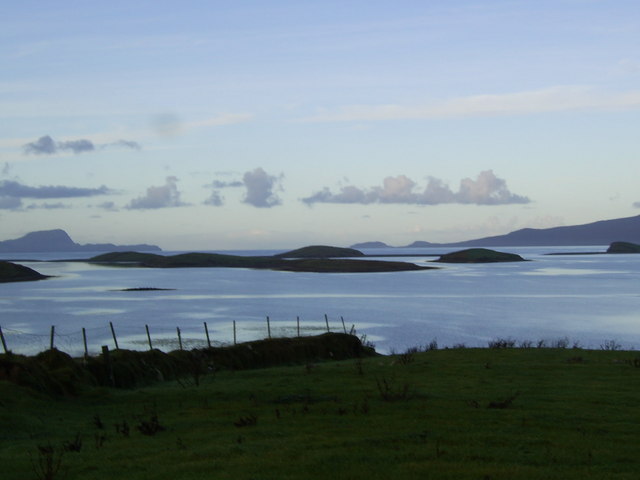 © Copyright Kieran Campbell and licensed for reuse under this Creative Commons Licence.

At Louisburgh, you turn inland and away from the coast now, heading down to Leenane through the wilds of Mayo. With the Sheefry Hills on your left and the Mweelrea Mountains on your right, you are surrounded at every side by jaw-dropping views of outstanding natural beauty. 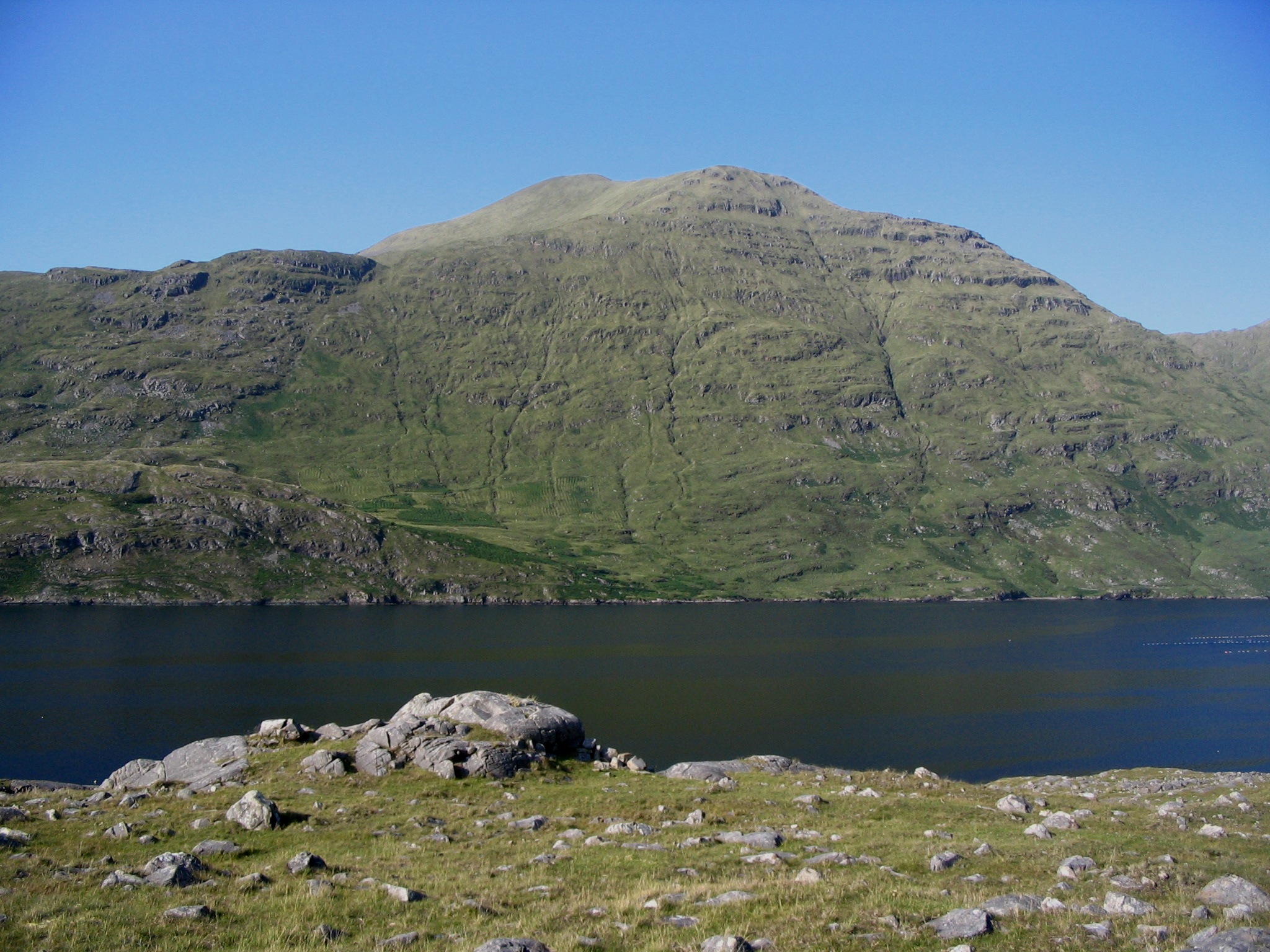 On the way, you will pass Doo Lough, a long, dark sliver of a lake between two mountain ranges. There is a memorial stone erected to honour the memory of the 400 people who lost their lives here on 31 March, 1846, while being forced to walk the 40-odd kilometres from Louisburgh to Delphi Lodge to get famine relief from the local government. 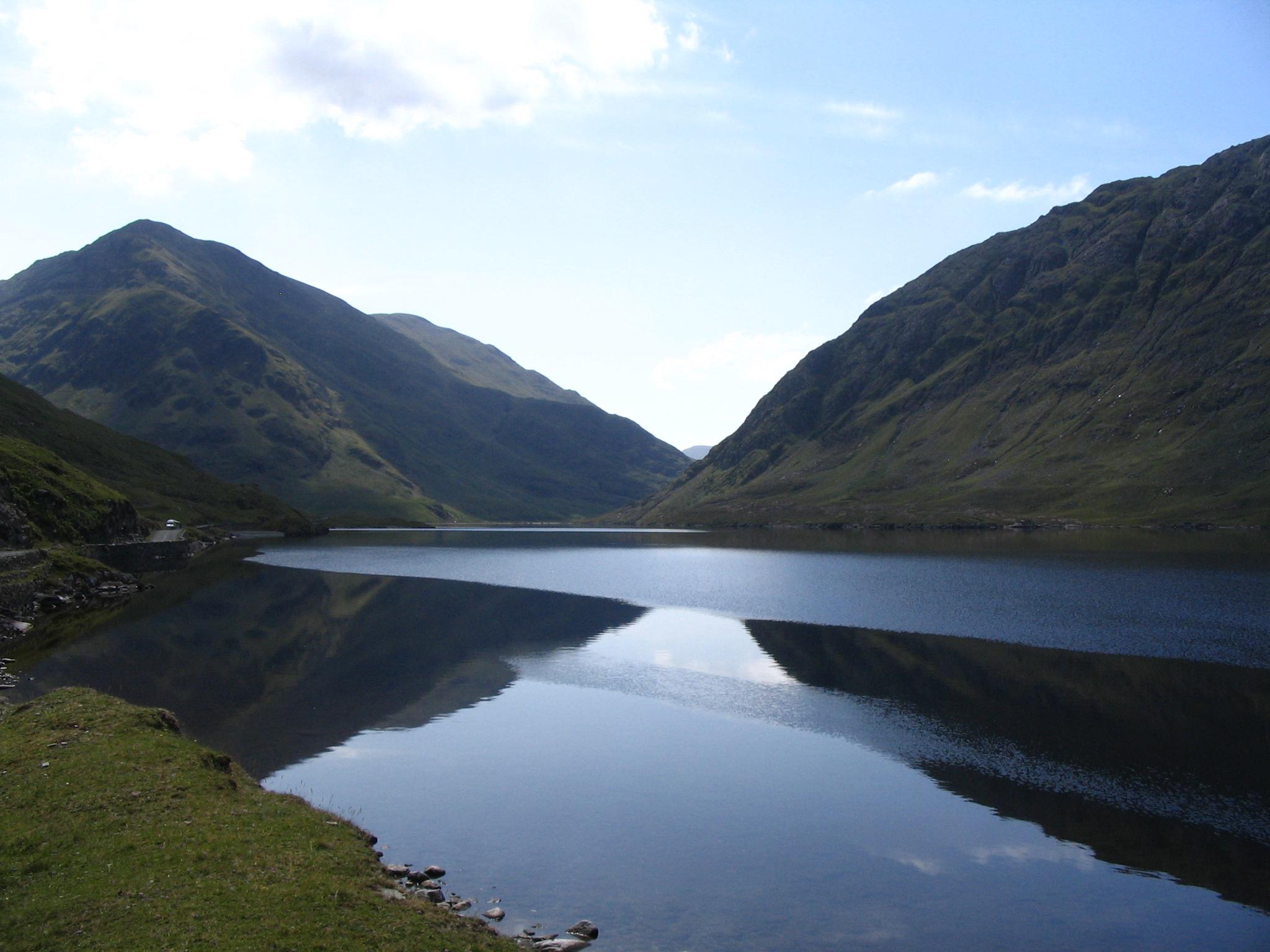 You’ll be looping back to the Delphi Pass area later on in the day, but for now you come down from the mountains and out onto Killary Harbour, one of only three glacial fjords in Ireland.

Further down the road, you’ll come to the beautiful Aasleagh Falls, a waterfall located on the River Erriff just where it meets Killary Harbour. Salmon fishing is an important part of life here, so if you’re a keen angler, enquire in Leenane as to licenses and fishing gear - folks will be only too delighted to help! 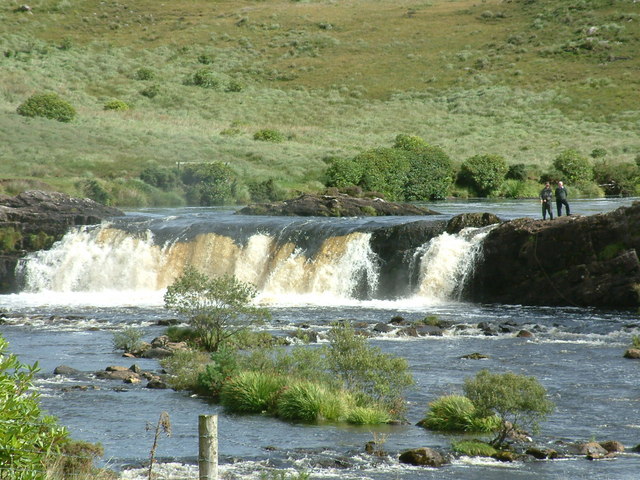 © Copyright Steve Edge and licensed for reuse under this Creative Commons Licence.

Leenane is a little gem of a village known locally as the “Gateway to Connemara”, as all the area just below it is known as the Connemara (proper). Film buffs will be interested to learn that Jim Sheridan’s film adaptation of the famous play “The Field” was shot right here in Leenane in 1989. The town itself was briefly home to famous actors such as the late Richard Harris, John Hurt and Tom Berrenger. If you like, you can visit the locations used in the film! 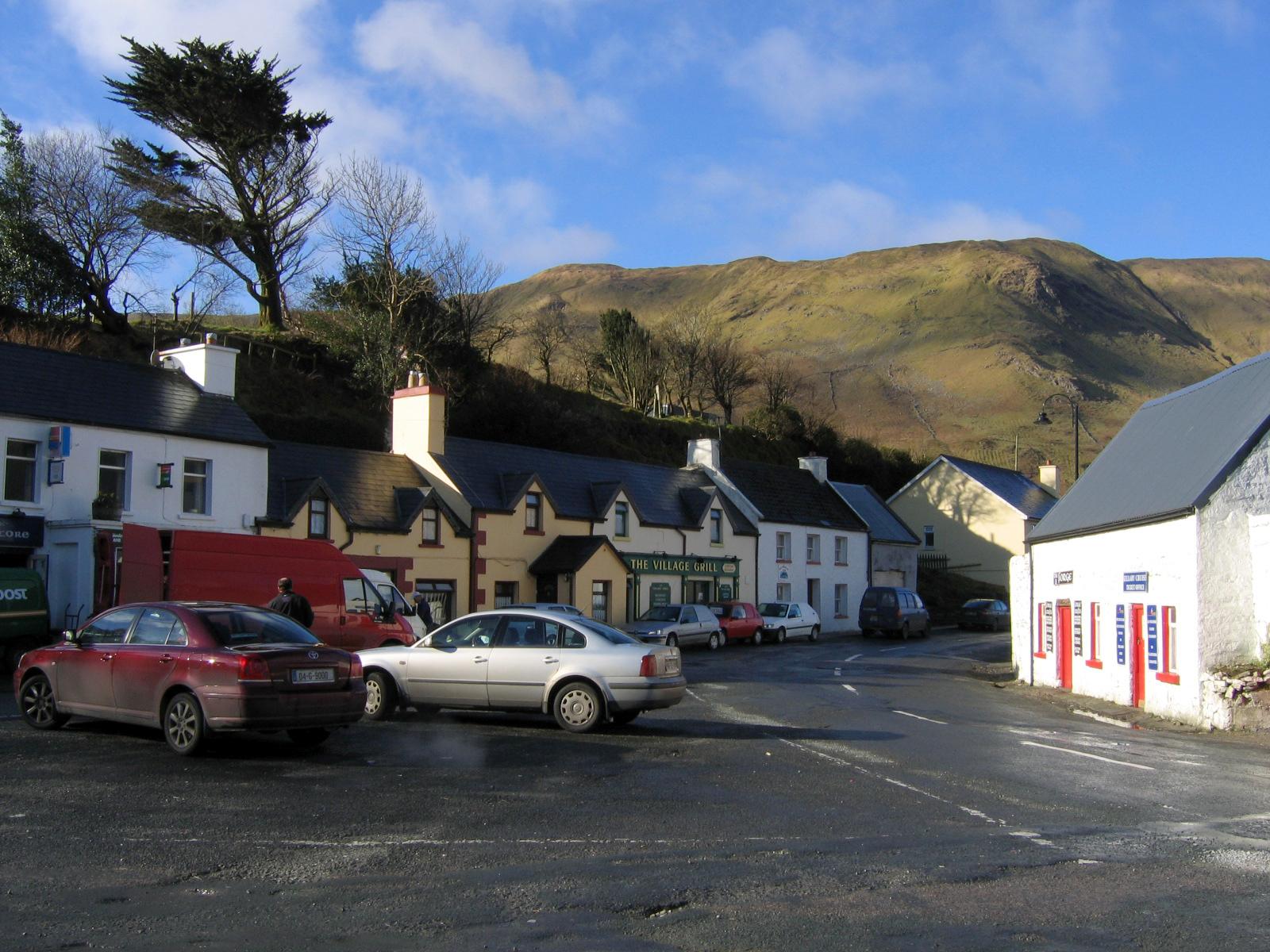 While in Leenane, pay a visit to the Sheep and Wool Centre, a family run centre based on the sheep and wool industry. Grab lunch at the An Tobár Cafe, where the array of delicious cakes will leave you groaning, and then head over to the museum on site where they hold daily demonstrations of how sheep’s wool is made into yarn, all done on wheels and looms from the early 1900’s. The kids can have a go themselves - it’s not as easy as it looks!

Now turn the car around and head back to Delphi, and this time we’re ending up at the grand estate house, Delphi Lodge, nestled between the mountains and the lake. 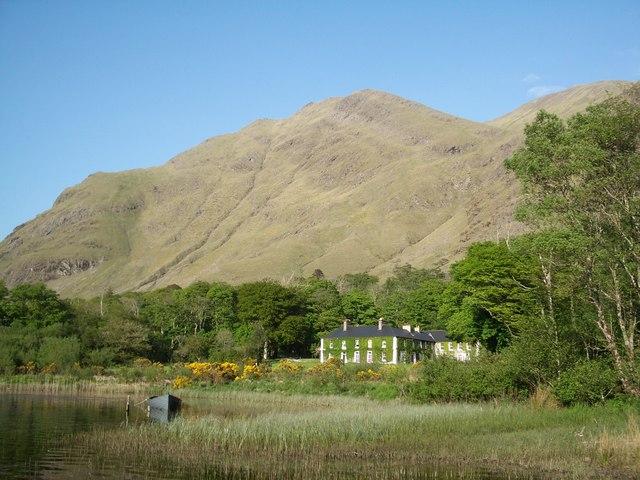 Formerly the home of the Marquis of Sligo, this delightful 1830s country house and fishing lodge now plays host to anglers, wedding parties, and walkers. Even if you plan on heading back to Westport to stay overnight, make a point at stopping off for high tea here, as it really is one of Ireland’s most haunting beauty spots. Connemara at its best - unspoilt, wild beauty.

If you and your family are outdoor enthusiasts, then you’re in luck - Delphi Adventure Resort is a 300 acre piece of adventure heaven! Featuring a 4-star hotel, a spa, and adventure centre, the desires of the whole family can be accommodated, from relaxing to water skiing and fishing! All set within the truly magnificent, unspoilt landscape of the Delphi Valley - what more could you want.