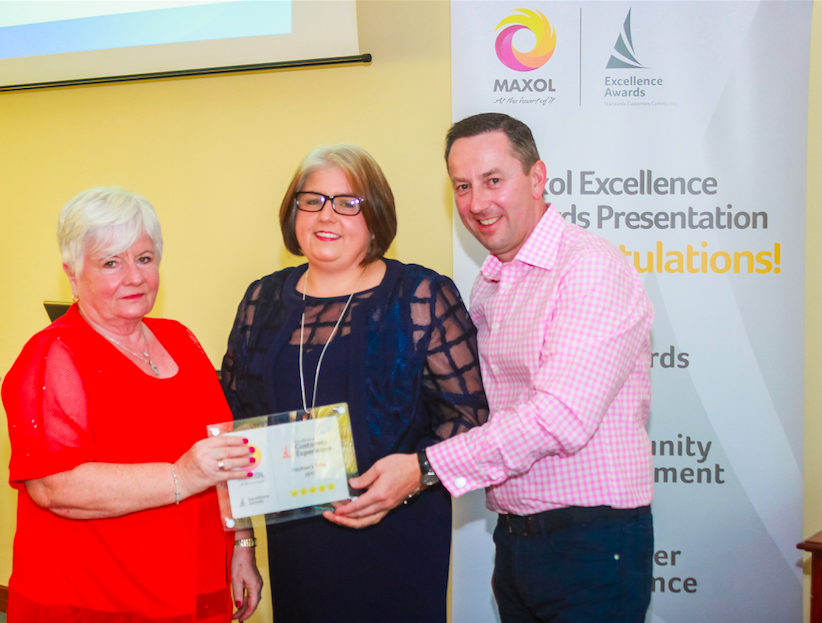 Caption: Pictured at the 2016- 2017 Maxol Excellence Awards were owners of Souhan's Maxol Service Station, Meath (L-R) Ena and Nikkie Souhan with CEO of the Maxol Group Brian Donaldson who were honoured in the 'Excellence in Customer Experience' category.

Maxol, Ireland's leading family owned forecourt and convenience retailer has announced the winners of its 2016- 2017 Excellence Awards, which recently took place at the Quinta Do Lago resort in Portugal. The scheme promotes and rewards excellence in retail standards, customer experience, and community engagement, throughout its network of service stations across the island of Ireland. Maxol service stations in Carlow; Donegal; Dundalk; Kerry; Limerick; Maynooth; and Meath have been honoured for the quality of their service, offering a broad range of fresh food, and ensuring customers experience nothing but the best facilities and service when they stop at a Maxol forecourt.

Congratulating the winners, CEO of the Maxol Group, Brian Donaldson said: "I would like to congratulate our winning retailers and their staff who have topped the league tables in our 2016/17 Awards and was delighted to welcome them to Portugal in recognition of the high standards they delivered on a consistent basis, making Maxol first choice for our customers every day.

Our winning retailers have set a very high standard this year and I am extremely proud of their achievements, which sets them apart from their nearby competitors".

The Maxol Excellence Awards are now in their 20th year. Awards were presented on merit in the following categories: Customer Experience, Best Standards, Excellence in Community Engagement, and Store of the Year.

Top performing licensees are awarded in each category, and those achieving excellence across all the categories are recognised as Store of the year.

This email address is being protected from spambots. You need JavaScript enabled to view it. 01 6627 111 Sheena.sweeney@priorcommunciations.ie

About The Maxol Group

The Maxol Group was established in 1920 by William McMullan. The 4th generation of the family are Company Directors.

Maxol makes a significant contribution to the economy on both sides of the border and markets a comprehensive range of oil and petroleum products to the Irish Market, through their Retail, Fuel Card and Lubricants divisions.

The company employs directly and indirectly more than 1,000 people across the island of Ireland.

Maxol has been investing and expanding in recent years and currently has a network of 234 service stations, of which 115 are company owned.

The new food brand Moreish – Fresh Food at Maxol was launched in 2014 and is currently in 31 Maxol service stations and growing. It won 'Best Oil Company Initiative' at Ireland's Forecourt & Convenience Awards 2015.

Maxol was voted the most reputable oil company in Ireland for four consecutive years between 2012 to 2015 by Corporate Reputations independent survey.