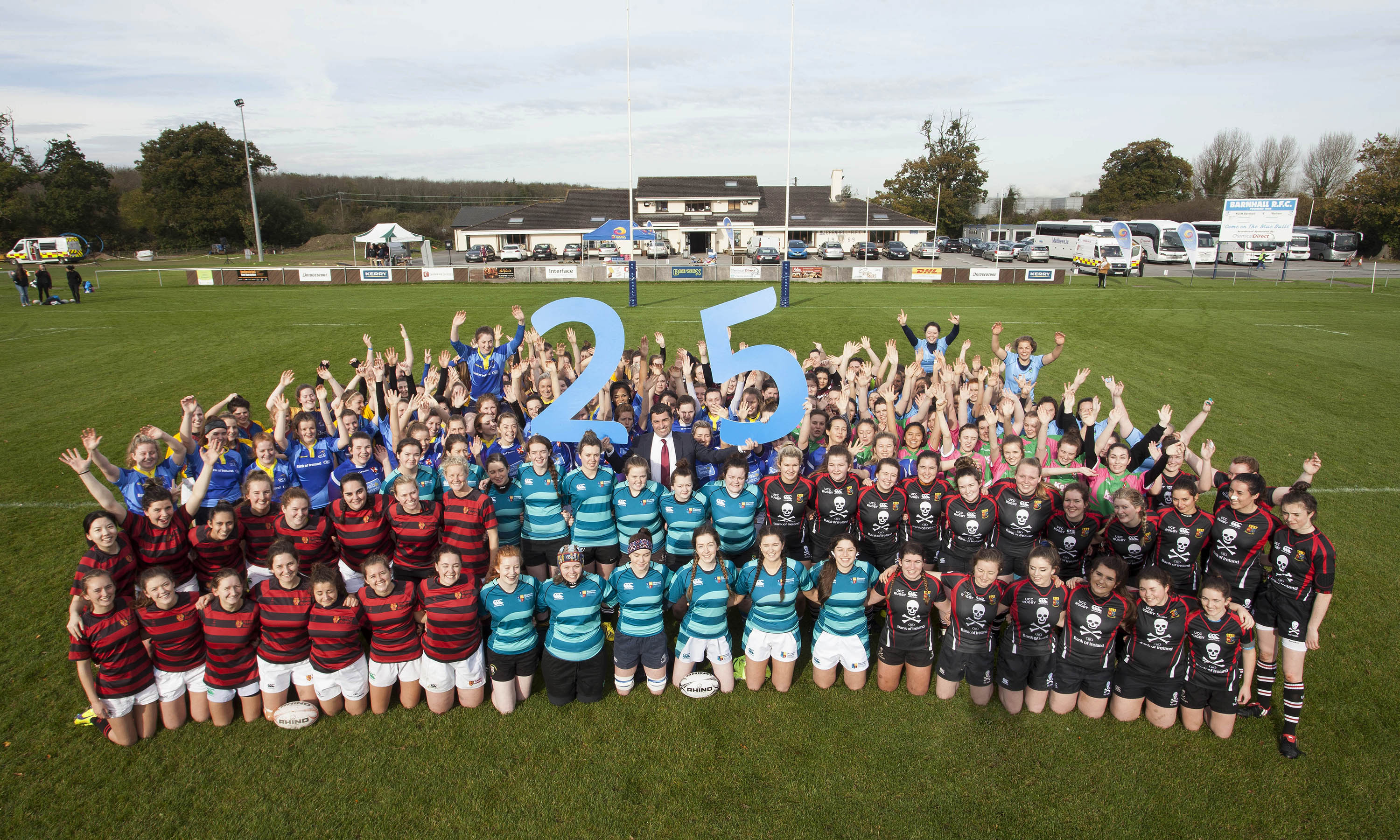 Pictured at the Maxol Irish University Rugby Union women's rugby event at NUIM Barnhall Rugby Club on Wednesday 18th, Dermot O'Toole, Head of Retail Operations, Maxol, and over 200 university players celebrate the kick off of the festival and 25 years of Maxol sponsorship.

Maxol, Ireland's leading family owned forecourt and convenience retailer, is celebrating one of rugby's longest commercial sponsorships with a partnership of twenty-five years with the Irish Universities Rugby Union (IURU) this year. The Maxol IURU Rugby Festival 2017 kicked off with a women's intervarsity tournament in Barnhall Rugby Club in Leixlip yesterday. Teams from UCD, Trinity, Maynooth, UCC, Galway, University of Ulster, UL, DCU, Queens Belfast, Waterford IT and Tralee IT competed for the Kay Bowen Cup. In a valiantly fought battle against NUI Galway, DCU took home the trophy.

Nora Stapleton, one of Ireland's best known female rugby players with 50 caps for Irelandincluding the Women's Rugby World Cup 2017, dropped by to watch the teams in action. She said,

"Since Ireland hosted the Women's Rugby World Cup this summer, interest in the game has surged. Well done to all the teams that played – it was great to see such a high level of rugby on display."

The Kay Bowen Cup was inaugurated five years ago and is named after the first woman president of a rugby club, namely DUFC (TCD). Kay Bowen attended the event yesterday and said,

"It was very gratifying to see such a great turnout of teams again this year, with over 200 women taking to the pitch. This is the first year that the tournament has been opened up to the Institutes of Technology and I am delighted to see Waterford and Tralee joining the competition and putting in such strong performances. I would like to take this opportunity on behalf of the IURU to thank Maxol for continuously backing university rugby over the last twenty-five years."

"We are delighted to be able to continue our long association with the IURU. At Maxol, we strive to be at the heart of it in communities around Ireland, and our sponsorship with the IURU provides us with an exciting platform to engage with our customers across our network of 234 service stations."

About The Maxol Group