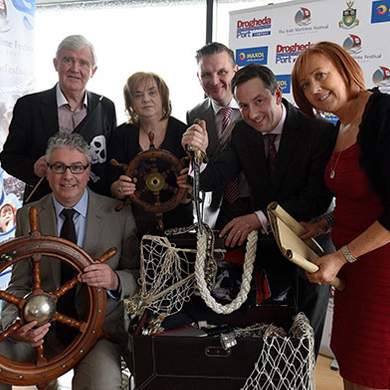 Maxol have been confirmed as the main sponsors of this year's Irish Maritime Festival, taking place in Drogheda from Friday-Sunday, June 19-21.

The Irish Maritime Festival in association with Maxol will see the Festival placed on an even stronger footing as a national event, with promotion across over 200 Maxol service stations as well as a strong presence on social media.

The success of the Irish Maritime Festival has been remarkable within its first three years.
Over 37,500 people of all ages visited the Festival in 2014 which offered many attractions along Drogheda Port, including vintage vessels, the Drogheda Motor Show, artisan food market, maritime history, live entertainment, pirate battles and the Boyne Swim to name but a few.

Expectations are high that this year's Festival will surpass that attendance figure with full programme details to be announced later this month.

In confirming Maxol's association with the Irish Maritime Festival 2015, Brian Donaldson, General Manager, The Maxol Group said: "As an Irish family business, Maxol has had a strong presence in Drogheda for many years during which time we have invested in our service station network and supported the local economy.''

"We are delighted to lend our support as primary sponsor of the Irish Maritime Festival, which is a huge event in Drogheda's calendar both from a family entertainment and business perspective. Through our network of service stations in Ireland, we are keen to help attract even greater visitor numbers this year and to be at the heart of the celebrations in Drogheda."

Involved since its establishment, Louth County Council, is now a main funder and programme manager of the Festival which is hosted in conjunction with Drogheda Port. Both the Council and Port warmly welcomed Maxol's major commitment to The Irish Maritime Festival.

Mary T Daly, Director of Services, Economic Development, Infrastructure & Compliance, Louth County Council, said: "It is tremendous that Maxol have come on board with The Irish Maritime Festival and I warmly welcome the company to a Festival that has expanded beyond all targets within a very short time. The Irish Maritime Festival was always intended to be a festival of national importance based along Drogheda Port Company. This major commitment from Maxol means we can continue to build an event for the national and indeed, international festival calendar.''

Denis Moynihan, Chairman of Drogheda Port, said "On behalf of Drogheda Port Company, I welcome the Maxol Group to the growing Irish Maritime Festival family. In playing a vital role in this annual festival, Drogheda Port welcomes the renewed focus on the town unique maritime culture and heritage. The Festival is a considerable co-operative undertaking each year and we look forward to what will be the biggest and best festival yet."

Cllr Kevin Callan, Mayor of Drogheda Borough District also welcomed Maxol as main sponsor of The Irish Maritime Festival. "The evolution of this fantastic Drogheda-based Festival over just three years has been amazing. In making a commitment to the 2015 Festival, Maxol are demonstrating the work that has been done and the huge potential that still remains for this ever expanding Festival."

Cllr Oliver Tully, Cathaoirleach, Louth County Council is also delighted to hear of Maxol's involvement. "I couldn't be happier to see 'The Irish Maritime Festival in association with Maxol' and congratulate all those who have forged such a great alliance. I look forward to hearing about what's in store for this year's event which has placed Drogheda, Co Louth on the national map."