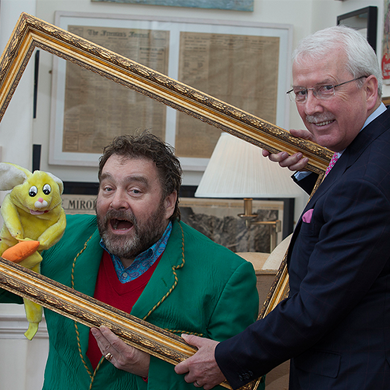 Maxol has 'Freed a Nipper' – one of the last of its kind - and its new home is in the Little Museum of Dublin at 15 St. Stephen's Green.

Maxol's iconic Nipper and Brendan Grace have been reunited. For those who don't remember, a Nipper was a furry rabbit-like glove puppet which came with a carrot and squeaked.

The Maxol early 1980's 'Free a Nipper' promotion saw parents beg, borrow and steal Maxol stamps in order to receive the coveted Nipper. Comedian Brendan Grace's character 'Bottler' was the public face of Maxol's national TV, radio and poster campaign. Approximately 400,000 Nippers were freed by the end of the campaign, creating a Maxol icon for generations to come.

Tom Noonan, Maxol CEO, who was instrumental in creating the "Free a Nipper" campaign gave this insight

"The Maxol – Bottler alliance did a huge amount for these two great Irish institutions. "Free a Nipper" ads consistently pop up in lists of Ireland's most memorable TV commercials. The fact that they were first aired almost 30 years ago and are still so fondly remembered by so many is a great tribute to the enduring appeal of Brendan Grace. Even at this stage, so many years later, it is impossible to overstate his impact in that Maxol promotional campaign. While the Nipper we have presented to the Little Museum of Dublin is one of the last of its species, fans of Brendan still abound, as do Maxol motorists."

Little Museum curator Simon O'Connor added "When we set up the museum 4 years ago, one of the first items on our list of must-haves for the collection was a Nipper, so we are thrilled to be presented with one of the last of the species today."

The 'Free a Nipper' campaign is still widely recognised as one of the most impactful marking campaigns in the history of the Irish oil industry.