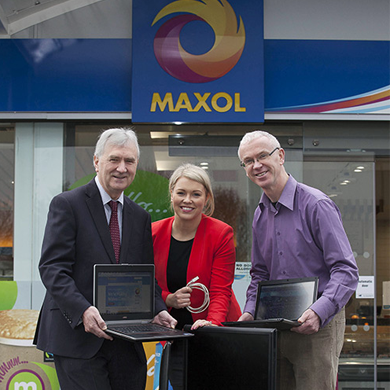 Maxol confirmed today that it donated 45 previously used computers to Camara Education for use in African schools. Every computer that Camara reuses gives 21 children digital literacy. Maxol's contribution will impact almost 1000 children. If you consider the amount of computers that can be recycled in Ireland alone, over 5,000,000 children could receive 21st century computer skills. This will only happen if attitudes toward computer reuse change in Ireland.

Speaking about the donation to Camara, Stephen McCormack Maxol's Group IT Manager commented "While Maxol is very active at the heart of local communities in which we operate this was a chance to give something to the community further afield. We had back office computer systems from our service stations that were surplus to our needs and it's great to see them going to such a worthy cause."

Camara uses technology to deliver 21st century skills to improve education in disadvantaged communities around the world. Any donated IT equipment, peripherals or parts that cannot be reused by Camara have been recycled at an authorised Waste Electrical and Electronic Equipment (WEEE) facility. Computers reused will also be recycled at an authorised facility at end of life.